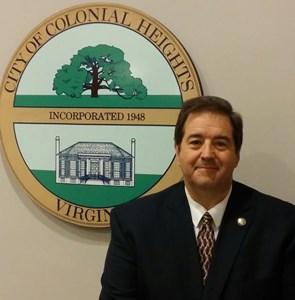 W.J. "Joe" Green was elected to his first term on the Colonial Heights City Council in November 2008 and second term in November 2012. He is a native of the City; his parents moving here in 1963. He attended elementary through high school in Colonial Heights (Class of '75), lettering in football and wrestling. He attended Richard Bland College and received a Bachelor's degree (BS) with honors from Virginia State University in 1984. He has been employed with CSC as a Defense Contractor at Fort Lee since 1998.

Joe married in 1981 and rented a home on James Avenue. In 1991, they purchased their current home on Walnut Avenue. He is the father of three lovely daughters; graduates of CHHS in 2003 (Radford in 2008 and living in Utah), 2008 and 2012 (both currently attending BYU-Idaho).

Joe is an active Christian member of the Church of Jesus Christ of Latter Day Saints since 1976. He enjoyed officiating High School to Little League football 2009-11 as a National Federation of High Schools (NFHS) and VA High School League (VSHL) certified member of the Central VA Football Officials (CVFOA) and basketball 2009-10 with the Tri-Cities Basketball Association. He has served on the City School Board for three terms (1996-2008), is a past President and Board Officer with the Colonial Heights Band Boosters, VA Association for Competitive Swimming (VACS), and the Swim and Yacht Club (SYC; currently serving as Membership Director), Cub Scout and Scoutmaster with Pack and Troop 176 and now Scoutmaster of Troop 107, a Board Member on the Commonwealth Girl Scout Council, and City Recreation B League football and Tee Ball assistant coach.

He loves his hometown and appreciates the opportunity to keep Colonial Heights an excellent community to raise a family.
Employment
Payments
Meetings & Agendas
Maps
Notify Me®
Report a Concern
/QuickLinks.aspx