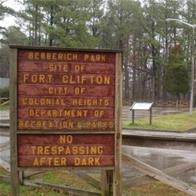 
Fort Clifton was a Confederate stronghold on the Appomattox River, serving as an important link in the line that defended Richmond and Petersburg in 1864 and 1865. Located on a high bluff at the junction of the Appomattox River and Swift Creek, the fort controlled navigation on the river north of Petersburg and was a formidable defensive bastion that wasn't taken by Union forces until the fall of Petersburg on April 3, 1865. The three earthworks that comprised the fort's batteries still stand on the bluffs along the river.

Artillerists and militiamen garrisoned the position in 1862, and the fortifications were completed early in 1864. A powder magazine, guardhouse and prison stockade, hospital, and even a “ladies quarters” stood inside the fort, while underground huts were “built into ravines and gullies” around it. Rifle pits - running northwest toward a six-gun battery on Swift Creek - protected the fort’s flanks from infantry assault and are readily visible behind the main earthworks today.

In May 1864, Fort Clifton withstood five Union sorties up the Appomattox River. The most serious came on May 9, during the Bermuda Hundred campaign. Union gunboats commanded by Gen. Charles K. Graham bombarded the fort while Federal forces probed Confederate defenses on both sides of the river. During this attack, the gunboat Samuel L. Brewster was disabled by Confederate fire and scuttled. 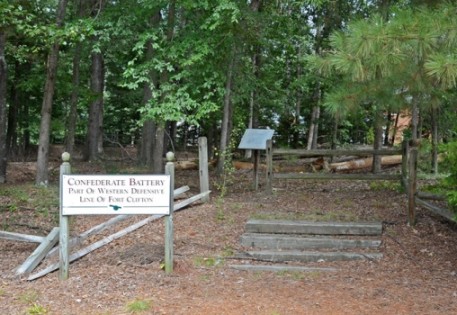 As the 10-month siege of Petersburg progressed, the men were constantly exposed to the fire of Federal pickets and artillery on the opposite bank of the river. Fort Clifton was evacuated April 2, 1865. A detail spiked its 14 guns and blew up the powder magazine. A week later, members of Fort Clifton’s garrison surrendered with the remnants of the Army of Northern Virginia at Appomattox Court House.

Free admission. Open year round from 7:00 am to dusk.
View details and amenities found at Fort Clifton Park.

The Fort Clifton Festival began in May 1976 as part of the Bicentennial celebration and has become an annual event, held on Mother's Day weekend. The festival is family-oriented and educational, portraying the historical significance of the fort.