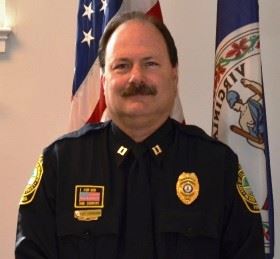 Dann has an Associate’s Degree in Criminal Justice from the State Fair Community College and is a graduate from the National Criminal Justice Command College at the University of Virginia.  He is a past recipient of the Jaycee’s Police Officer of the Year Award, M.A.D.D. Officer of the Year Award, member of the American Legion Post 284 and member of the International Association of Chiefs of Police.  Dann has served on the Colonial Heights Youth Advisory Committee and is a veteran of the United States Air Force.