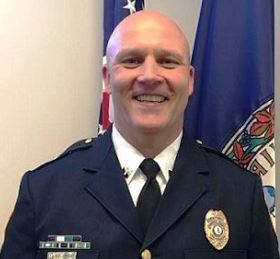 Captain Steven C. Groat began working for the Colonial Heights Police Department in August, 1997, and has been assigned to the Patrol Division for the majority of his career.  By 2005, he had been promoted to sergeant on a night shift.   In 2007, he received a promotion to lieutenant as supervisor on the same night shift.  During his 11-year tenure as supervisor, he personally tallied over 160 DUI arrests.  Even more significantly, Captain Groat was lieutenant in charge during the capture of America’s Most Wanted 1000th capture of Dwight A. Smith, a fugitive who had been on the run from New York City for more than a year.

Steve has an associate’s degree in criminal justice from Mohawk Valley Community College in Utica, New York.  To his credit, he also graduated from the 2013 session of the University of Virginia’s National Criminal Justice Command College held at Virginia State Police headquarters.