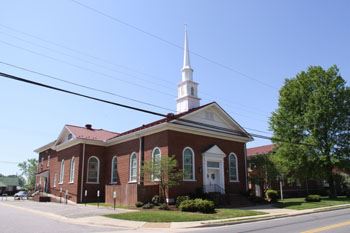 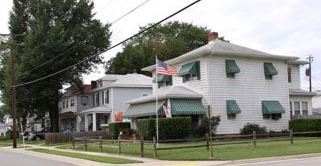 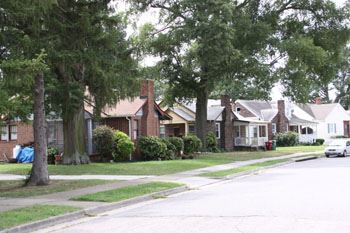 Next Previous
The Chesterfield Highlands Historic District is located in the City of Colonial Heights, Virginia, approximately one mile north of downtown Petersburg and twenty-five miles south of Richmond, Virginia. The City adjoins Chesterfield County on the north and west, the City of Petersburg on the south, and Prince George County on the east. The district was developed in the early decades of the twentieth century as a carefully planned middle class neighborhood. Covering approximately fifty acres, the historic district is bounded by East Westover Avenue on the north, Pickwick Avenue on the south, Lafayette Avenue on the east, and the Boulevard on the west. The boundaries of the district correspond to the legally platted subdivision boundaries filed in Chesterfield County in 1916.1 The district features a spectrum of architectural styles popular in the first half of the twentieth century. Integrated within the district are three prominent community churches. At the southwest corner of the district, a cluster of small-scale commercial buildings are included within the boundaries because of their perennial association with the residential neighborhood. Chesterfield Highlands is laid out in a gridiron plan. The original platted lots were moderate and uniform in size and setback, typically twenty-five feet wide and one hundred to one-hundred-and-twenty feet deep. Contributing to the park-like, suburban feeling, the majority of the houses are situated on double-lots. Nine lots fronting on the Boulevard were within the original boundaries of the Chesterfield Highlands neighborhood. However, eight of these are now excluded from the historic district because they have been filled with commercial buildings that are not in keeping with the overall character of the district. Setting and Landscape The Chesterfield Highlands Historic District, composed of fifteen city blocks, is a compact urban neighborhood in the heart of the City of Colonial Heights with an overall terrain that is level and fertile. The west boundary of the district is reinforced by a major national north-south thoroughfare, Route 1/301 (historically known as the Richmond-Petersburg Road or Boulevard and now called The Boulevard), with a steady and uninterrupted flow of vehicular traffic. East Westover Avenue, which defines the north boundary, supports a steady volume of local traffic. Still, the internal streets of the district are quiet and protected such that the neighborhood retains the peaceful feeling of its suburban origin. Mature shade trees, mostly deciduous oak, maple, and poplars, are a distinguishing characteristic of the neighborhood. Among the more common evergreen trees are hemlocks, magnolias, and hollies. The properties are dotted with hundred-year-old trees that survive from the initial platting of the district though maple trees from a planting initiative fifty years ago are the most numerous type. Mature foundation plantings, notably azaleas, boxwood, acuba japonicas, hydrangeas, and nandinas, contribute to the well-established neighborhood setting. The district encompasses all of Lee, Norfolk, Richmond, and Suffolk Avenues, each just three blocks long. The district also includes substantial portions, three or four block stretches, of Danville, East Westover, Lafayette, and Lynchburg Avenues. Pickwick Avenue, an L-shaped street at the southwest corner of theresidential district, is lined on both sides of the street with small-scale commercial buildings, erected between 1946 and 1953 to support the burgeoning residential community. The streets throughout the neighborhood are generally fifty feet wide with two-way traffic flow and on-street parking. All of the streets are asphalt-paved and most are edged on both sides by concrete curbs and on at least one side by concrete sidewalks.2 Houses are generally set back approximately thirty feet from the curb. Few of the front yards are fenced although chain link and tall wood privacy fences often surround the rear yards. Nearly all of the blocks are divided centrally and longitudinally by thirty-foot-wide public alleys that provide rear access to garages and sheds. Established in 2000, the Flora M. Hill Park, 300 Norfolk Avenue (106-5063-0115), occupies the two-acre site of the former Flora M. Hill School. Bounded by Lafayette, Norfolk and Richmond Avenues and Lee Place, the verdant, grassy park is dotted with ornamental trees and bordered on all four sides by concrete sidewalks. There are two inter-connected circular walkways which provide access to the interior of the park. The raised, semi-circular, brick planter-box and the sidewalk that wraps around it are original. Both structures were located in front of the Flora Hill School building. A raised brick planter, filled with lowgrowing shrubs, ornamental trees, and flowering bulbs, borders the sidewalk along Norfolk Avenue. There are two play-gyms for children in the park.
To view the entire National Register of Historic Places Report click here.