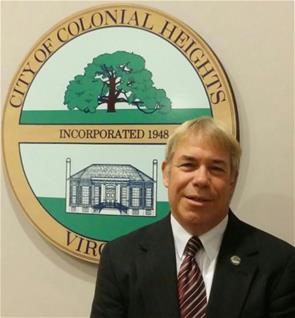 Kenneth “Kenny” Frenier has consistently served the City as a Councilman since his initial election in 2007. When asked why he wants to serve on Council, Mr. Frenier stated, “I enjoy serving the citizens of the city that I have lived in all my life. I feel that I bring a wealth of expertise in the Public Safety arena which affects every living person in the city no matter where you live.”

Mr. Frenier graduated from Colonial Heights High School in 1976. Over the years, he has attended J. Sergeant Reynolds, John Tyler Community College and Virginia Commonwealth University.  After graduating from high school, Mr. Frenier worked for three years with the Virginia Department of Highways and Transportation, after which time, he began working for the Colonial Heights Department of Fire & EMS. After 28 years of service with the Department, Mr. Frenier retired in 2007 as a Battalion Chief. He now serves as a part-time Logistics Officer with the Department.

Mr. Frenier is active in many civic organizations including the Colonial Heights American Legion Post 284; the Colonial Heights Fire & EMS Volunteers; and the Virginia Association of Volunteer Rescue Squads. Mr. Frenier is also a member of New Jerusalem Baptist Church in Hopewell where he serves as a Trustee and Treasurer. Mr. Frenier represents City Council on several committees including the Transportation Safety Commission, VML Transportation Policy Committee, and the Senior Citizens Advisory Committee. Additionally, Mr. Frenier is a small business owner.