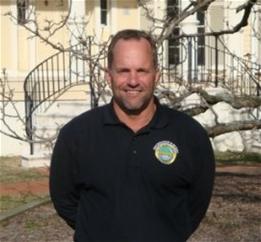 
Craig Skalak was appointed Director of Recreation and Parks on December 23, 2009. He is responsible for managing the operations of the department’s six divisions; Recreation, Parks, Buildings and Grounds, Agency on Aging, Horticulture and Violet Bank Museum.

Craig is a lifelong resident of the City of Colonial Heights. After graduating from Colonial Heights High School with the Class of 1978, Craig attended Smithdeal-Massey Business College, Richard Bland College and Virginia Commonwealth University.

Craig has spent two-thirds of his professional career with the City of Colonial Heights. The first 10 years of his working life was spent in the private sector with a recreational and sporting goods firm. He is a member of the Virginia Recreation and Parks Society and the National Recreation and Parks Association.

Since January 1989, Craig has served as the City’s Recreation Superintendent, directing and managing the City’s recreational programming. He is familiar with all aspects of the City’s Department of Recreation and Parks having served the City for over 20 years in his previous position.

As a long-term resident of the community, he appreciates the issues and needs of the department, the City organization and its residents.