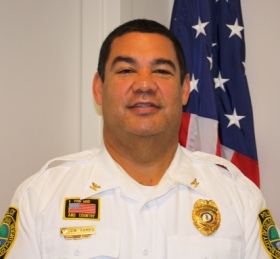 
Colonel Jeffrey W. Faries, Chief of Police, has been with the Colonial Heights Police Department since August of 1989. Chief Faries was a part of the expansion in the city that occurred with the opening of Southpark Mall. Chief Faries started his career as a patrol officer and within two years, he was assigned to the Investigations Division as a detective. In 1995 came his first promotion to Detective Sergeant. A year later, he returned to patrol where he supervised a squad until his next promotion to Lieutenant in 2001. At this point, Chief Faries became the commander of the Investigations Division due to his knowledge and leadership skills. A promotion to Captain in 2005 found him responsible for all of uniform patrol. After the retirement of Chief Richard L. Schurman in December of 2005, Captain Faries was given the responsibility of Acting Chief of Police. In August of 2006, after an intensive national eight-month search by P.E.R.F. (Police Executive Research Forum) and a review of 78 applicants from across the country, then Acting Police Chief Jeffrey W. Faries was chosen as the City’s new Chief of Police.
Colonel Faries holds an Associate in Applied Science Degree in Police Science from John Tyler Community College, a Bachelor of Arts Degree in Criminology from Saint Leo University, and is continuing his graduate studies in Virginia Tech’s Master’s Program. Chief Faries is a graduate of the prestigious F.B.I. National Academy’s 212th Session, the F.B.I. Law Enforcement Executive Development Session 68, and is a fellow with the Sorensen Institute for Political Leadership through the University of Virginia. During his illustrious career, he has received several distinguished awards for service to our community, including Officer of the Year (1992), Medal of Valor (1994), and was a two–time recipient of the M.A.D.D. Award (1997 and 1998). In 2009, through the leadership of Chief Faries, the department was awarded the Virginia Municipal League’s Risk Management Excellence Award. Also in 2009, Chief Faries received the International Association of Chiefs of Police (I.A.C.P.) Leadership Award from the National Law Enforcement Leadership Institute on Violence against Women. In December, 2012, the Colonial Heights Police Department obtained State accreditation from the Virginia Law Enforcement Professional Standards Commission.

Among his many work-related memberships, the Chief is the past chairman of the Central Virginia Regional Narcotics Task Force. He also serves his community as past president of the Colonial Heights Kiwanis Club and is a member of Chamber of Commerce. He maintains memberships in such professional organizations as the F.B.I. National Academy Association, the F.B.I. Law Enforcement Executive Development Seminar Association, the I.A.C.P. (International Association of Chief’s of Police), the Colonial Heights Transportation Safety Commission, the Juvenile Administrators Concerned for Kids Committee, and the Chesterfield County/Colonial Heights Community Criminal Justice Board. Chief Faries’ membership in the Virginia Association of Chiefs of Police (V.A.C.P.) finds him currently sitting on two boards—the Virginia Highway Safety Commission and the Witness Protection Board. In addition to sitting on the John Tyler A.S.A.P. (Alcohol Safety Action Plan) Board, Chief Faries also holds a seat on the John Tyler Community College’s Police Science Board, Crater Criminal Justice Academy Board and their respective Executive Board. Chief Faries graduated from the I.A.C.P.’s Center for Police Leadership in the area of Leadership in Police Organizations (2008) and the I.A.C.P.’s National Law Enforcement Leadership Institute on Violence against Women (2009). Currently, Chief Faries is the Chairman of the Board of Directors for Crater Criminal Justice Training Academy and is a member of the Evidence-Based Decision Making Policy Team for the City of Colonial Heights and the County of Chesterfield.
Chief Faries’ commitment to his community is evidenced by his regular participation in such events as the annual Colonial Heights City Clean-up Day and the annual Special Olympics events, such as Little Feet Meet and the Torch Run. He is a great supporter of the City school system and the Kiwanis Terrific Kids Program. You will find him in attendance at the many high school sporting events as he cheers on the mighty Colonials. Jeff resides in the City with his wife, Trinia, and daughters Michelle and Madison.