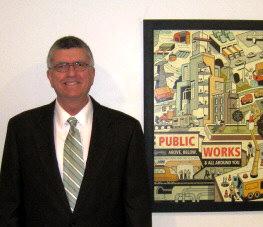 Director of Public Works and City Engineer William E. “Chuck” Henley, P. E. has thirty-one years of professional experience in the public and private sectors. In June 2007, he was appointed to the consolidated position of Director of Public Works and City Engineer for Colonial Heights. Prior to his current appointment he managed the Richmond office of Stantec Consulting Services Inc., a multinational consulting firm, for a year and a half. Previously, he served the City of Richmond, Virginia (pop. 200,000) for five years in the positions of Deputy Director and Interim Director of the Department of Public Works. Before that, he held various positions with Multnomah County, Oregon (pop. 660,000), which includes the City of Portland and five other incorporated cities. He concluded his 21 years of employment there after serving as the County Engineer for five years.

Chuck is currently Vice President of the Virginia/District of Columbia/Maryland Chapter of the American Public Works Association, an 820-member organization. Most recently, he was appointed to serve on the Federal Emergency Management Agency’s (FEMA) Region III Advisory Council.

He received his Bachelors of Science in Civil Engineering from Portland State University and his Master of Business Administration from the University of Portland, both located in Portland, Oregon. He is a registered professional engineer in Virginia and in Oregon.
In his executive roles, Chuck has provided leadership, policy direction and management support to staff providing public works services, facilities and infrastructure. In addition, he has been responsible for the marketing, operations and management of consulting services provided to clients in local, state and federal government. He has served as director of a full-service Public Works Department of 600 employees with an operating budget of $75 Million and a capital budget of $200 Million. His experience also includes executive-level management of transportation programs at both the city and county levels of government.

While with the City of Richmond, he was part of a team of local public works officials that advised First Cities, the state advocacy coalition comprised of 14 of Virginia’s oldest and most historic cities, on legislative changes to the Commonwealth’s transportation policies. The changes enacted by the Virginia General Assembly in 2002 and 2005 provide localities with more flexibility in the use of state transportation funds and allow for payments directly to those localities that choose to administer their urban construction programs.

Throughout his career he has worked closely with citizens, business representatives and officials at all levels of government to improve community livability and economic vitality. His experience includes supporting public policy formulation and implementing the key initiatives of elected and appointed chief executives. Chuck has worked collaboratively with professionals and the public to develop policies, standards, and guidelines to achieve community development goals including environmental sustainability and multi-modal transportation programs. He has negotiated and administered cooperative agreements for the public-private financing and construction of major facility and infrastructure projects. He has also directed emergency response and recovery operations to restore facilities and infrastructure damaged by natural disasters including earthquakes, floods and hurricanes.
Employment
Payments
Meetings & Agendas
Maps
Notify Me®
Report a Concern
/QuickLinks.aspx